Greg’s activism dates back to his teenage years when he worked on behalf of environmental, consumer rights and other issues.   Upon moving to Upper Merion about 10 years ago, he became involved in local government serving as a member of the Economic and Community Development Committee (“ECDC”) where he quickly rose through the ranks.  In the early portion of his tenure, the ECDC produced the touchstone document known as the Vision 2020 which provided a template for the future of Upper Merion Township.

After serving as both Secretary and Vice-Chairman of the ECDC, Greg eventually rose to the position of Chairman of the Economic and Community and Development Committee which he held for 3 years.  During this time, he formed the Community Center/Cultural Center Subcommittee and served on that committee, initiated work on the Business Improvement District, advocated a new website as a way to attract business as well as enhancing communication and worked on creating a public/private partnership to preserve the historic Moore-Irwin house where George Washington spent time during the colonial era.  He also promoted smart, responsible economic development designed to provide jobs for Upper Merion residents and to maintain both our standing as the lowest taxed municipality in the 5 County Area as well as our Aaa Bond Rating.

Greg brought his lifetime of environmental activism with him to Upper Merion. 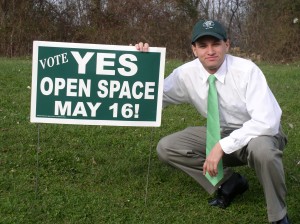 From the Open Space Referendum

Recognizing the need for land and open space preservation in the Township, Greg co-founded and served as Chairman of Greener Upper Merion, organizing dozens of volunteers throughout the community and successfully rallying 84.4% of the voting community to support the Open Space Referendum which preserved $5 million worth of Open Space throughout the township.   His op/ed promoting land preservation was published in the Philadelphia Inquirer was used by other municipalities to promote Open Space throughout the region.  An active hiker and biker, Greg co-founded Friends of Upper Merion Trails in order to provide residents of the Philadelphia Metropolitan Area with multi-use trails through the township and linkage with Valley Forge Historic National Park.

Greg received his B.A. from the University of Maryland in 1995 and his J.D. from the University of Miami in 1997.  While in law school he received a Mofsky Scholarship for Public Service.    To this day Greg proudly serves as co-President of the local University of Maryland alumni club as well as an active Terrapin Club member, which raises money for college scholarships.   Greg is a frequent blood donor for the American Red Cross and he has also provided a significant amount of pro bono legal services.

In recognition of his accomplishments and community involvement, in 2009 Greg Waks was elected to the Upper Merion Board of Supervisors finishing in 1st place, finishing ahead of the incumbent Chairman of the Board of Supervisors and two other candidates.  He was the only Democrat to win in Upper Merion in 2009.  Since that point in time Greg has worked hard for the residents of Upper Merion – his record can be found on the Waks Works for YOU page.  In 2015 Greg was re-elected by the largest margin in Upper Merion history, receiving more votes for Supervisor than anyone in history and receiving more votes than any other candidate who had an opponent.

Greg is 45 years old and a self-employed small business owner.